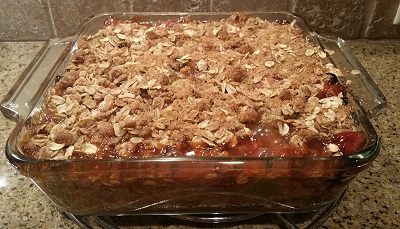 Rhubarb Crisp, similar to Rhubarb Crumble or the closely related Rhubarb Cobbler is my favorite of that group.  It is the tastiest... and healthiest.  It's mostly rhubarb and oats!  And everyone loves it!

Crisps, crumbles and cobblers are all shallow pans of fruit and some flour or grain thickener, with a sweetener. Some cobblers are made with the flour on top of the raw seasoned fruit and baked; while others mix the thickener and the sweetener with the fruit and heating it and then put the flour topping on last.  Crisp are usually uniform mixes of fruit and grains, usually oats.  Here's how to make a great tasting rhubarb crisp, in easy steps, with photos to illustrate each step.

If you want to make this gluten free, just substitute oat flour for the wheat flour, and arrowroot strach or potato starch for the corn starch.

The recipe consists of 3 portions: the chopped rhubarb, the crumb bottom and topping, and a liquid sweetener/thickener 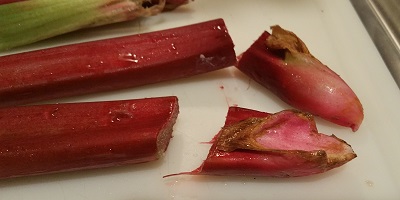 Step 1 - Wash and chop the rhubarb

Just wash the rhubarb under cold water, using your fingers to rub the stalks, especially allong the inside channel where dirt typically sticks. Then chop into  1/2 to 1 inch pieces (1.5 cm to 2.5 cm). Be sure to cut off the bottom portion of the stalk that attaches to the plant - it's tough.  See the 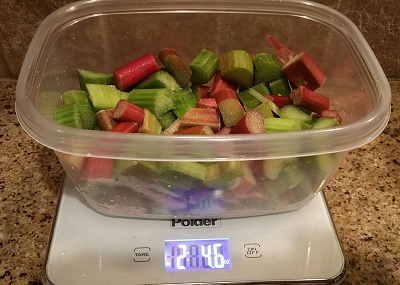 photo at right.  Two and a quarter pounds is about 4.5 cups of chopped rhubarb, so if you don't have a scale, just use a measuring cup.

Step 2 - Measure and mix together the crumb portion ingredients

together in a mixing bowl.

Just take your finger and about 1 tablespoon of butter, coconut oil, shortening, or spray coating to evenly coat the interior surfaces of the pan. 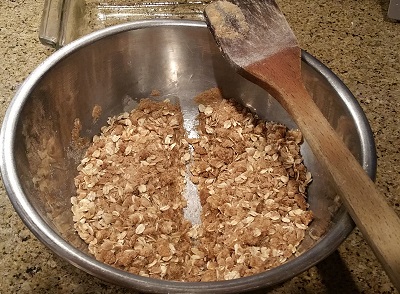 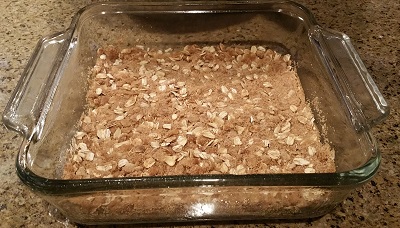 Put 1/2 of the crumb mix in the bottom of the greased pan and gently pat them down into place, with the back of a large spoon. 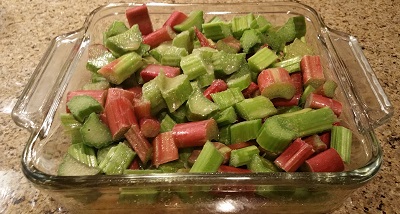 Put the chopped rhubarb in the pan on top of the first half of the crumbs.

In a small bowl, mix together the 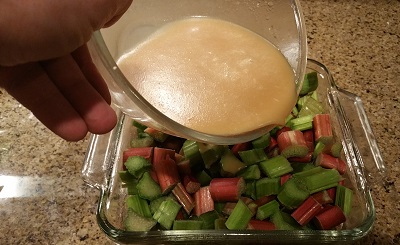 Step 7 - Pour the liquid portion over the rhubarb

That's it, just pour the liquid from Step 6 evenly over the rhubarb in the pan 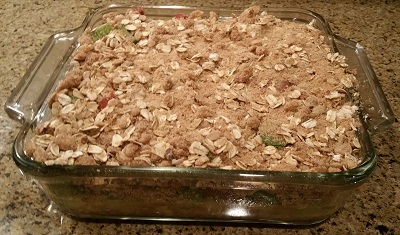 Step 8 - Sprinkle the remaining crumbs on

Evenly sprinkle the remaining crumbs over the rhubarb.

Longer won't usually hurt, but an hour usually does it.  Add 15 minutes or so for higher altitudes

Many people prefer it warm with iice cream on top. It will keep for a week in the fridge.  If you don't ahve children, a spouse and you yourself have good self-control.

Above is the
2020 version of
the Ball Blue Book