How to Substitute Honey For Sugar in Home Canning and Cooking

Looking for How to Substitute Honey For Sugar in Home Canning and Cooking in 2022?  Scroll down this page and  follow the links. And if you bring home some fruit or vegetables and want to can, freeze, make jam, salsa or pickles, see this page for simple, reliable, illustrated canning, freezing or preserving directions. There are plenty of other related resources, click on the resources dropdown above.  If you are having a hard time finding canning lids, I've used these, and they're a great price & ship in 2 days.

How to Substitute Honey For Sugar in Home Canning and Cooking

How to Substitute Honey for Sugar in Home 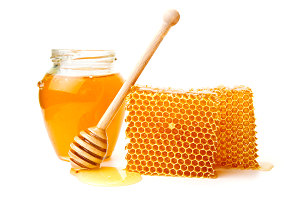 How to use honey in place of sugar in recipes

There are no hard and fast rules to substituting honey and sugar in recipes, but this page should help you quickly decide how much you will want to use in your particular recipe, instead of table or cane sugar.  In general, substituting honey for sugar seems to be a matter of taste. Some people use it cup for cup, others prefer 1/2 cup - 2/3 cup of honey per cup of white sugar. Reduce the amount of other liquids by 1/4 cup for every cup of honey used. Lower the oven temp about 25 degrees F to prevent over-browning and add 1/4 teaspoon of baking soda for each cup of honey to your batter. (Honey is naturally acidic and the baking soda tempers it.)

If you are diabetic, keep in mind that honey does not reduce the calorie or carbohydrate content of the sugar syrup, and thus is not acceptable sugar replacements for people on diabetic diets.

You may also be interested in our page about substituting Agave nectar for sugar.

Background: Differences and Considerations Between Honey and Cane Sugar

Moisture: If you just swap honey for sugar the finished product would likely be rather soggy and sticky. But, if we examine the rest of the ingredients in a recipe, we can determine which items will absorb some of the water in the honey and increase those to compensate. Or we can take the opposite approach and reduce some liquid from the recipe.

Density: A cup of granulated sugar weighs 8 ounces (1/2 lb or 1/4 kg; 250 grams). A cup of honey weighs 12 ounces (3/4 lb or 340 grams). So if you were to substitute honey in a recipe that calls for brown sugar, you'd be adding twice the amount of food. A cup of brown sugar weighs only 6. But a cup of maple syrup weighs 11 ounces and it slightly less sweet than honey; so you should use about 10% less honey than maple syrup.

Flavor: Honey has its own unique flavor.  General it is a light and pleasing flavor, but if it conflicts with the desired taste of your recipe, there's not much you can do about it.  However, most people seem to like the flavor that honey adds!

Acidity: Since honey adds acid to a recipe, if the recipe is sensitive to that you would have to neutralize with the addition of a pinch of baking soda. Adding 1/8 teaspoon of baking soda per cup of honey is advised in baking, but since most canning recipes prefer acidity, no action is needed if you are using honey in place of sugar in canning.

These are general recommendations and since the type, quality and properties of the other ingredients affects how the sweetener acts, you may have to do some trial and error to get the exact substitution for the results you want.  But these rations should work and be tasty!

Substituting honey for other sweeteners

Substituting plain water for the sugar syrup reduces the calorie content of canned fruit by approximately 205, 280 or 375 calories per pint, assuming 2/3 cup of thin, medium or thick syrup, respectively, is replaced with water.  In many cases you can use water instead of sugar or other sweetener, because sugar rarely is used for preservative proprieties... BUT, the products may taste awful with no sweetness!  I'll point out (in the recipes on other pages) when it can be done and how much it appears to affect taste.